Twin Peaks For Gold And Palladium: Which Will Last Longer?

It happened in the most unexpected way possible, and the question now is how long it’ll go on.

Gold and Palladium, the world’s two most valuable metals, are both charting peaks for 2020. In palladium’s case, it’s a resumption of the record highs seen a month back. Analysts are divided on what to make of the rallies and how much steam they’ll have.

“While the industrial metals complex is creeping higher, as traders anticipate a V-shaped recovery from the coronavirus, appetite for safe-haven assets still appears to be insatiable,” TD Securities said in a note.

“Precious metals and treasuries alike continue to see strong demand as a result, and while the gold trade remains a crowded one, the average trader’s position size is still not excessive — which somewhat mitigates the risk of a rush to the exits. Indeed, a change in the market’s narrative would be required as gold positioning would need to decline through a swift decrease in the number of traders long.”

Gold shattered the $1,600 per ounce ceiling on Tuesday for the first time in six weeks, returning to a key bullish psychological level it last hit when U.S.-Iran tensions spiked in the aftermath of the Trump administration’s assassination of top Tehran general Qassem Soleimani. 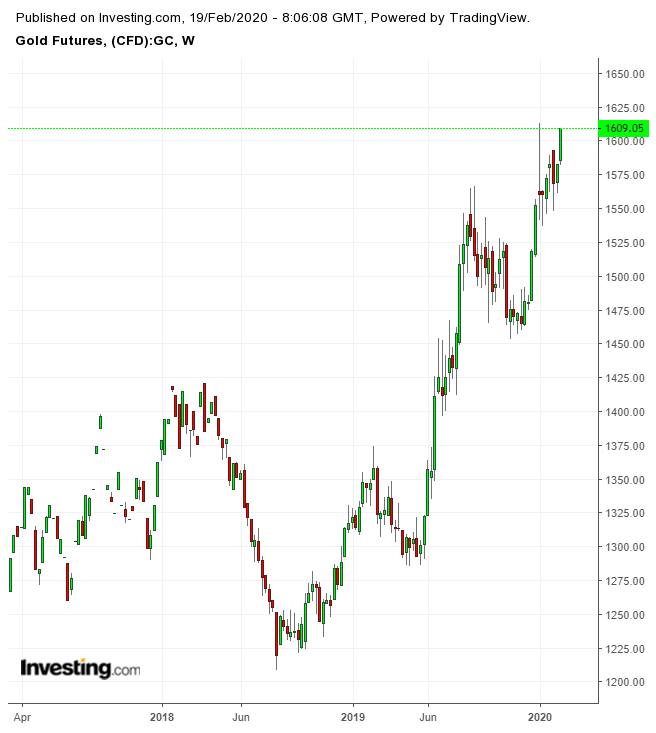 While recapturing $1,600 had never seemed too hard a target for gold bugs, the odd thing was what got the market there. Tuesday’s spike in gold was triggered by — of all things — an Apple (NASDAQ:AAPL) revenue warning. The world’s most valuable tech company cautioned that the COVID-19 outbreak will prevent it from meeting its Q2 revenue forecasts due to production and sales slides in China, the manufacturing hub and one of the largest markets for its iPhones.

That triggered an investor rush into safe havens, tripping the $1,600 circuit-breaker for gold.

While both bullion and futures of the yellow metal set new 2020 highs in Wednesday’s Asian trade, there was a lack of clarity on how much upside was left for gold in the current round.

A return and close below $1,572 would form a “bull-cross” in gold futures that would weaken the near-term structure and sideline bulls. 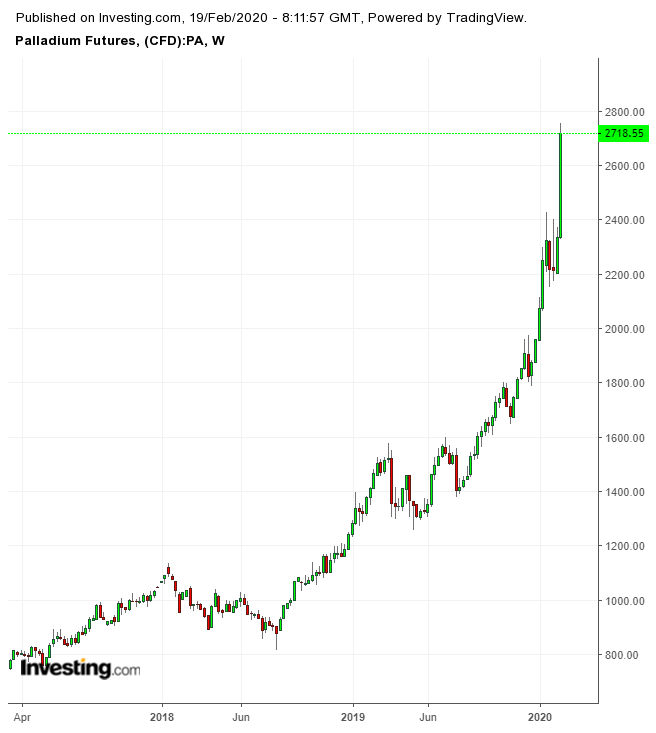 The bull story in palladium was the same as a month back — a power supply crisis in major producer South Africa, that was back to throttle output of the autocatalyst metal.

While that may have been a perfect excuse for palladium’s previous run, there’s one problem now — the COVID-19 outbreak and its impact across Chinese industries, particularly the auto industry, the largest of which is in China.

Anglo American Platinum’s (OTC:ANGPY) outgoing Chief Executive Chris Griffith said on Tuesday there were signs that demand for palladium was starting to weaken in response to high prices.

Griffith predicted that automakers may start to use more platinum— which is almost $1,500 an ounce cheaper to palladium — as a substitute for catalytic converters in gasoline engines. Platinum, also an emissions purifier and engine catalyst, is typically used in diesel cars. Some auto manufacturers say that while substitution is logical for economic reasons, retooling of car assembly plants to make the change may dissuade many.

Palladium is “the most dysfunctional market I’ve ever seen in my life,” Bank of America metals analyst Michael Widmer told the Wall Street Journal, pointing to the shutdowns or cutbacks by almost every major automaker with operations in China.